Left 4 Craft is one of the biggest zombie add-ons for Minecraft PE, turning the game into a real zombie apocalypse!

Add a large number of new species of the most dangerous living dead to the world of Minecraft Pocket Edition, including two new zombie bosses, each with unique features that make survival much more difficult.

This new species of resurrected dead will be found everywhere, and they are likely to gather in packs, trying to kill you at the first opportunity. They do not differ from normal zombies in their characteristics, except that they do not burn in daylight.

Brown zombies can be found in desert biomes. As a result of mutation their flesh has become resistant to daylight, but zombies have got increased speed.

New type of living dead to be found in all biomes. They have 15 health points and can throw burning projectiles at the player. After death they can leave a potion with dragon’s breath.

These sinister clowns will no longer show you tricks, but can still surprise you. After all, they no longer take daylight damage, look just awful, and attack the player immediately.

Despite their size, these babies carry their favorite toy, the TNT block, and if they get close enough to you, will instantly explode! An additional problem will be the fact that they only appear at night, and due to their small size, they can’t always be spotted in time.

It is unknown where and how these zombies lost their legs, but it is safe to say that they can still move, and do so quite well. You can meet crawling zombies in Minecraft in any biome.

In the past they were common villagers, but zombie apocalypse turned them into the living dead, wandering the game world in search of brains and flesh. They have 80 health and 6 damage.

Nature has played a cruel joke with these zombies from the Left 4 Craft mod for Minecraft PE. On the one hand, they still look like once-living creatures, on the other hand, the zombie virus has so mutated in their bodies that they are covered with sharp spikes. They have 30 HP and inflict very strong attacks on the player.

Perhaps zombie spiders are the reason why zombie apocalypse spread so fast in Minecraft, as they inhabit all biomes, have great movement speed and can infect living creatures with zombie virus.

A zombie giant has 120 health and deals 16 damage per hit. Your main advantage is that you can see him from afar, although he’ll probably already spot you too!

One of the most dangerous opponents in the zombie mod on Minecraft PE Left 4 Craft. The zombie tank has a large health reserve (200 units) and an extremely strong hit (14 damage per attack). If you dare to fight him, make sure you have sturdy armor and better weapons.

Video overview of the mod 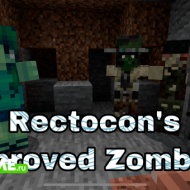