Build your own subway or add a fully functioning subway to your modern city map with the Subway Pack Add-on!

This mod adds three types of subway trains from different cities of our planet – Moscow, New York City and London – to Minecraft PE. Each of the subway train cars is close to their original models from real life.

With the subway mod in Minecraft PE you will be able to build your own subway, create different stations and move through the subway in a real car! 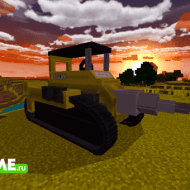