With the Sky Update mod you can add fictional and real-life birds to the world of Minecraft PE, including a new sky boss!

There are a huge number of different mods created for Minecraft PE that we tell you about every day, but for some reason not so many bird mods have been created for the game. But with this addon, you can see new creatures not only on the ground, but also in the sky above!

The first new mob is the fictional Chinese dragon, which is also quite a powerful boss in the game. His power is so great that he’ll have no problem destroying even a dragon-destroyer!

To summon the Chinese dragon, you’ll need to craft an ancient fossil:

After that, the ancient fossil must be activated, augmenting the crafting with a couple of new ingredients:

Once you summon a Chinese dragon, it will appear in the sky and attack you with powerful magical projectiles that can even destroy some blocks.

Eagles are new birds that will appear in the world of Minecraft Bedrock Edition right after installing the Sky Update mod.

They will inhabit most of the biomes, as well as the taiga and the desert and will be able to hunt chickens, sheep, rabbits and turtles.

These members of the feathered family prefer cold biomes, where you will be able to detect them. They will attack chickens, turtles and rabbits for food.

Travelling in or near the sea, you’ll notice new birds that will periodically dive into the water – these are seagulls conducting their underwater hunt for fish.

Birds of prey that will appear in MCPE along with the installation of this mod. They prefer warm biomes such as savannah and desert.

Be careful, vultures are capable of attacking the player, so you should be prepared to have to fend off these formidable birds.

Another fictional bird from the Sky Update add-on is the phoenix. Everybody knows the legend about their appearance – it is the bird that was resurrected from the ashes. That’s why you will meet the phoenix only when the lightning hit the desert or snow eagle.

During its flight, the phoenix leaves behind a very beautiful trail of fire, especially in the night sky. But don’t admire it for long, as they are sure to attack you! 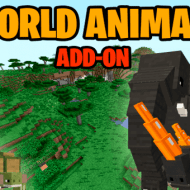 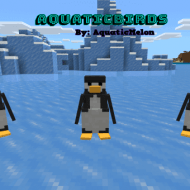 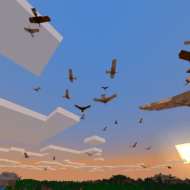