This mod will add 13 monsters and mutants at once to Minecraft Bedrock Edition, which were found in the movies and books!

Unlike other mutant mods, all monsters in the Godzilla King addon are full-fledged bosses, for the battle with which you will have to prepare better equipment, and maybe even additionally download mods for firearms.

Known from the movie of the same name, the giant lizard that appeared after testing the hydrogen bomb.

A beefed-up version of Godzilla capable of emitting a massive blue beam from its mouth that destroys anything in its path.

Transformed version of the previous mutant that can now fly.

There’s probably no one who hasn’t heard of King Kong! Now you can face this very strong and dangerous giant ape in person.

This variant of Godzilla can not only attack you in close combat, but also fire powerful lasers at long range.

One of the most powerful bosses in mod. Just look at his damage and health!

At first glance, this monster looks a lot like a chimpanzee, but you’ll notice its tusks, which seem to be inherited from mammoths!

Another baffling monster that has clearly undergone massive mutations.

This giant spider can not only take out any enemy, but can regenerate its full HP in only a minute!

One of Godzilla’s most famous enemies that doesn’t mind fighting someone else, like you!

In mythology, this mutant has entire mountains and forests on its back, so gigantic is it!

The flaming version of Godzilla that can burn every terrain to the ground.

As you can see, these giant monsters are difficult to fight, even with a non-Godzilla sword. Therefore, you will be able to create a new weapon, the Godzilla Katana, attacking for 25,000 damage. 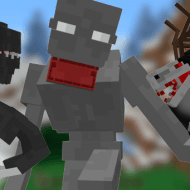 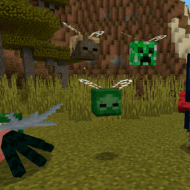