The improved caves mod completely redesigns the dungeon generation, improves the sound environment, and adds a large number of new mobs and a dangerous underground boss to the game.

Even if you install the Cave Update mod and continue the game on a map where you already have any buildings or mines, they will not be affected. New dungeons will only open in mines you have not explored!

The Spider’s Nest is a very dangerous, cobweb-covered terrain. But if you dare to explore it, you will be generously rewarded with loot from spider eggs.

Ruined Portals – The portals to the netherworld, built by no one, that were damaged by time. Of course you can rebuild them with obsidian blocks.

Vases – new items that can be found in the dungeons. By destroying vases you can find the keys to the chests containing large amounts of gems and useful items.

Metal and gold chests – very rare in the dungeons, but contain a lot of useful things. Metal and gold keys are found in vases, which can be opened by trunks.

Bone clubs – they are extremely strong, and therefore impossible to break. Each blow not only causes huge damage, but also throws the enemy at a distance. You can find the baton in the chest.

Spider’s Nest is a reward that can only be obtained by defeating the main dungeon boss, the giant spiderwoman. Spider’s Nest will summon green-eyed spiders to your side, destroying all enemies on your path. An indispensable item in dungeon raids!

By installing the enhanced dungeons mod for Minecraft PE, your caves will be even more unique thanks to the new underground biomes:

Underground Jungle – mines with lots of vegetation and mossy rock. They are very dangerous because they are inhabited by a large number of dangerous monsters.

Ice Mines – Covered with snow and ice, hiding a large number of resources underneath.

Trapped in the dungeons, the miners need your help! Feed them, so they have enough energy to follow you, take them to the nearest village and you’ll be richly rewarded. Once they’re back home, you can purchase useful items from the Miners that will come in handy in the dungeons.

Small, friendly creatures that give off light. You can lure them using brown mushrooms. If you kill the firefly, you can get glowing goo, which gives you night vision. You can also craft 4 units of glowing goo into Miner’s Lantern

These small arthropods are found all over the earth and gather ore. When they see the player, they will try to run away from you. If you can catch and destroy a Gatherer Beetle, you’ll get coal, iron, gold, or even diamonds!

Every time you open a cave treasure chest, you risk being attacked by a mimic. They do a lot of damage, so sometimes it’s wise to just run away from the mimic.

Rural Miners who were never able to find their way out of the dungeon and return home. Armed with a pickaxe and attack the character as soon as he is in their line of sight.

A large number of new underground spiders that will interfere with your exploration of the mines and the search for useful resources.

The main boss of the dungeons is the giant queen spider. It is a summonable boss that can be activated using 4 spider hearts and 5 threads. It has 275 life units and 2 attack modes, depending on the distance to the enemy, so we recommend being thoroughly prepared to meet it! For defeating the boss you will get the Spider’s Nest.

Cave Update V3.mcaddon
4 dungeons and caves mods for Minecraft like this one 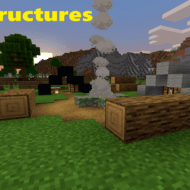 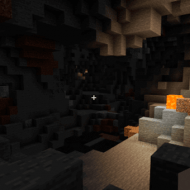 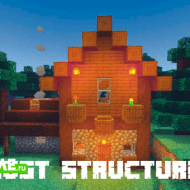