If you have long wanted to have a real full-scale battle in the world Minecraft Pocket Edition, with a large number of soldiers and large-scale fights, the mod World War II is a great solution!

Now imagine that on the battlefield there are not only American and German soldiers, but also tanks that fire on enemy fortifications and fighter and bomber planes that fly in the sky!

Both sides have tanks that fire fire fireballs and are additionally armed with large-caliber machine guns with gunners to fire on enemy infantry. The German tank is larger and has more armor.

German and American armaments include fighters and bombers. The first ones circle the battlefield and deliver fire to the infantry; the second ones fly over the battle and drop TNT bombs on the enemy’s vehicles.

Machine gunners – heavily armed soldiers who will be firing on suppressing the enemy army.

German Truck – present only in the Germans, added to the game at the request of one of the fans of mods for the Second World War in Minecraft PE. Can carry two soldiers at a time.

Each side will fight with a large number of very different fighters. On the battlefield you will be able to meet both ordinary infantrymen, as well as rocket launchers, machine gunners, snipers and medics.

Depending on their affiliation and the type of troops, all soldiers from Minecraft warfare mod will have different weapons and try to destroy suitable targets. For example, grenade throwers first open fire on heavy enemy equipment, and snipers will try to destroy far away targets. 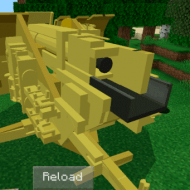