This map features a large military base where an entire army was stationed!

On this military base map in Minecraft, you will find barracks, airstrip, sanitary unit, secret laboratories, hangars, weapons stores (arsenal) and other military buildings. The perimeter of the military base is well protected and surrounded by a high wall with observation towers.

In addition to the buildings, the military base is equipped with an alarm system, firing range, air defense system, artillery guns and turrets. 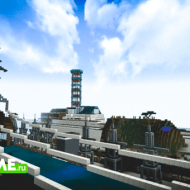