Want to play Among Us directly in Minecraft PE on your smartphone? The mod of the same name will allow you to search for traitors among your friends on two different maps from the original version of the game!

Among Us is a multiplayer social deduction game in which players must find traitors among the crew members of a space station.

The Among Us Add-on for Minecraft PE includes not only the ability to turn into an astronaut of a random color, but also two locations to play with friends at once – Mira HQ and Skeld. Both maps were created based on the original game.

Map of Skeld in Minecraft PE

How to play with friends?

Among-Us-Map.mcworld Among-Us.mcaddon
4 hide & seek maps for Minecraft like this one 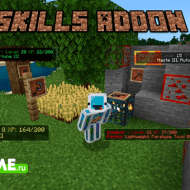 Searching for
Choose a category and specify what you want to find, and we'll find the most interesting selections for you!
Mods
TNT
Let's find
Contents hide
1 Map of Skeld in Minecraft PE
2 Mira HQ Map for Minecraft PE
3 How to play with friends?
Download Among Us Add-on
Popular